For nearly a century, timber production was the unchallenged king in Bend, most of it taking place in the Old Mill District. Hardy men used axes, crosscut saws, horses, and “high-wheel” rigs to cut down huge Ponderosa pines in the surrounding forests. The first of the big mills, operated by the Shevlin-Hixon Co., opened in March 1916.

A month later a rival company, Brooks-Scanlon, began operations at its “Mill A” complex on the other side of the river. In 1922 Brooks-Scanlon established a new, bigger mill complex upstream from Mill A. This “Mill B” site makes up the largest portion of the Old Mill District. At their peak, the Brooks-Scanlon and Shevlin-Hixon operations were two of the largest pine sawmills in the world, running around the clock and employing more than 2,000 workers each.

In 1950, facing dwindling timber supplies, Shevlin-Hixon sold its interests to Brooks-Scanlon. Brooks-Scanlon’s Mill A closed in 1983 and was in a state of near ruin before being restored in the early 1990s. The old brick powerhouse buildings and their three towering smokestacks still stand, silently testifying to the district’s colorful past. 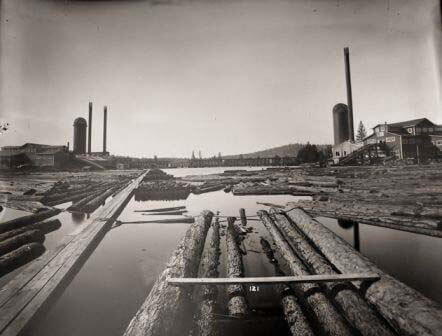 Brooks-Scanlon’s Mill A, now an office building near the Colorado Bridge, began with a single smokestack and burner (seen in the photograph).

Today the two cylindrical cement footings for Mill A’s burners, and the foundation of Mill A’s powerhouse, can still be seen on the back patio of Tumalo Creek Kayak & Canoe filled with flowers each summer.

In 1920 Shevlin-Hixon added a third smokestack and burner to their mill and Brooks-Scanlon Mill A added a second smokestack and burner increasing lumber production. The powerhouse building produced the energy to run the mills. The material used to feed the burners was called hog fuel, made of woodchips and shavings.

During the early years the Brooks-Scanlon Mill operated two 8 hour shifts daily, milling a combined average of 300,000 board feet of lumber a day.  That’s roughly enough framing for thirty homes (1,800 square feet each).

Read More About Bend’s History of the Old Mill District

A Look Back at the Old Mill District

Encompassing close to 270 acres right in the heart of Bend, the Old Mill District lies along the banks of the beautiful Deschutes River. The [...]

The History of the Smokestacks

Everyone is always asking about the Old Mill District's iconic smokestacks. Here's the story: An iconic landmark of Bend’s past, the smokestacks have come to [...]

Special screenings of WWI documentary “They Shall Not Grow Old”

Back by popular demand, Fathom Events and Warner Bros. Pictures have partnered to bring Academy Award-winner Peter Jackson’s poignant WWI documentary, "They Shall Not Grow [...]

Before we jump headfirst into 2019, we're taking some time to reflect on the past year. Specifically, we're looking at what were our most popular [...]

Subscribe to get the latest on Bend shops, restaurants, and things to do.