From a young age, Shelli Walters was drawn to art and the outdoors.

“My sisters, they didn’t want me on their adventures, I was always too little,” says Walters, a Bend mixed-media painter who grew up the youngest of five girls. “I really had to figure things out on my own and entertain myself.

“I had lots of outdoor adventures,” she adds, “but art, it’s always been part of my world. It’s something I naturally gravitated to. I’ve always done drawings and paintings. I’ve been creating something since I can remember.”

The Old Mill District is proud to partner with Walters this winter on our annual Winter Art campaign. Walters’ gorgeous mixed-media piece – Can you see the music sheets and upcycled Old Mill District guide pages in her painting? – sets the tone for our neighborhood this winter. You’ll find her art not only on the cover of this guide, but the basis for our annual holiday ornaments, the backdrop for SantaLand, and on banners, kiosks, billboards and in printed pieces throughout Central Oregon. 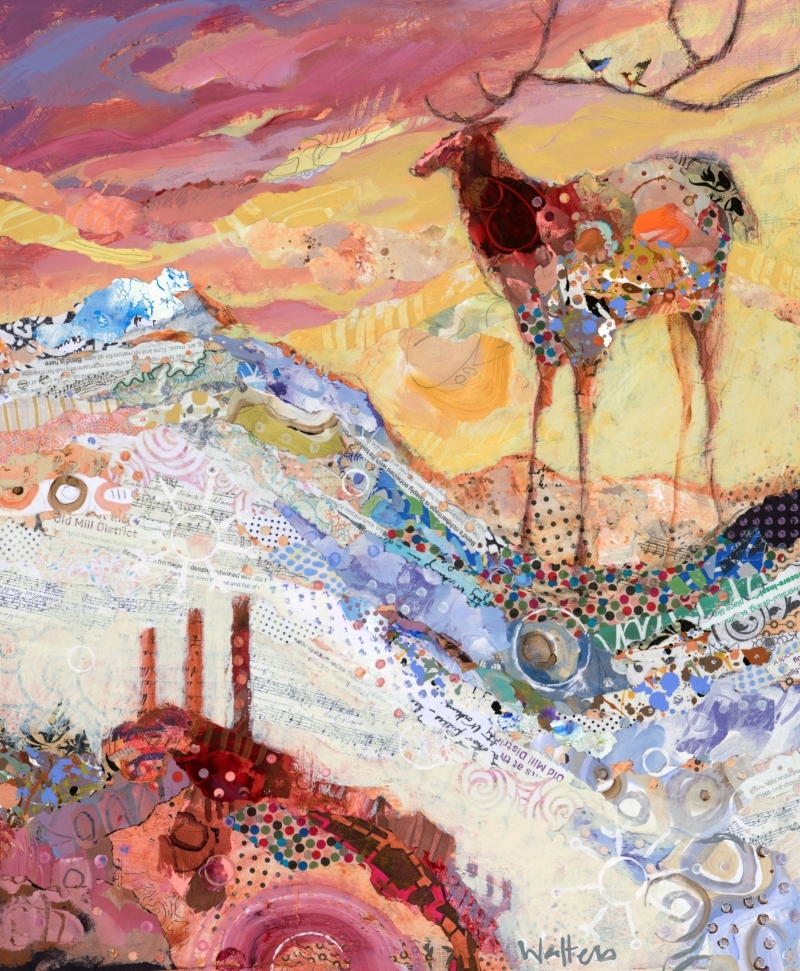 “I wanted to portray the warmth and charm of winter in the Old Mill District,” says Walters, a lifelong Oregonian who moved to Bend with her family from Seaside in 1979 when she was 10. “Summer’s easy. Winter’s tougher. It’s not as vibrant outside and I was intrigued by that challenge, bringing forth the color and beauty and magic that exists in the winter.”

Walters’ composition captures not only the natural beauty of Central Oregon – see the snow-capped mountains and a local buck, as well as the gorgeous colors of the golden hour when the sun sets over the Cascades – but also the area’s timber history in the Old Mill District’s smokestacks. Diving even deeper into the painting, you’ll find bits of music script and copy from past Old Mill District guides, hinting at the rebirth of activity that’s taken place along the Deschutes River where the Brooks-Scanlon and Shevlin-Hixon mills once stood.

“A lot of the inspiration for the painting came from having lived here and knowing firsthand the history of the Old Mill,” says Walters, a member of the Tumalo Art Company, an artist-run gallery in the Old Mill District. “I remember walking past the mills when they weren’t functioning. To see what it’s become today, it’s fantastic what’s happened and how it’s evolved.”

A graphic designer for more than 25 years – you’ve likely seen her work for Sunriver, the Cascade Culinary Institute, PacificSource, the Cascade Festival of Music and others – Walters left the security of an agency job in 2018 to pursue her art full time.

“It was terrifying,” Walters says about moving on from DVA, the Bend marketing and public relations firm she’d worked for since 1994. “I’m definitely a security junkie. That’s what held me at my comfy agency job for so long. But I’d kind of reached a point where I had to do it. Things were happening. There were all these signs and it became where I couldn’t ignore them anymore. It finally got to the tipping point where I had to brave up. I had to believe this was the right move because so many things were pushing me toward it.

“I finally did it,” she says, ““and it has been one of the most rewarding decisions I’ve ever made.”

In addition to curating the Old Mill District’s winter theme this year, Walters had solo shows at Tumalo Art Company and Spokane’s Marmot Art Space in 2019 and was part of a group show highlighting artists from the western part of the United States at the Favell Museum in Klamath Falls. She also created the foundational art piece for the Deschutes Children’s Foundation’s signature fundraising event, Ripples. Walters is currently working on signature artwork for the Deschutes River Conservancy’s annual RiverFeast dinner and auction in April.

“There’s no going back and I’m very glad I did it,” Walters says about pursuing her art. “We only get one turn here. If you have the skills and worth ethic and you’re in the position to (chase your passion), you gotta live your best life while you can.”