A Covid Friendly Replacement for SantaLand

When Chrissy Hadar’s 3-year-old son dropped a letter to Santa into a North Pole Express mailbox in the Old Mill District last December, he expected the jolly old elf would be eager to receive his annual wish list.

What he didn’t expect was a reply.

“He had just gotten home from a play date, and he was super excited to hear that [Santa’s] elves wrote him back,” said Hadar, who lives in Bend. “At his age, he’s beginning to realize the cause and effect of things. That letter is something we’ll hold onto for years.”

Hader’s son was one of more than 900 Central Oregon children who received personal messages back from Santa last Christmas thanks to the district’s North Pole Express effort, according to Old Mill District marketing director Carrie Ramoz.

Ramoz and her team rolled out the North Pole Express as a COVID-friend replacement to their usual SantaLand tradition. And, based on the public’s positive reception, it may have found a permanent place as part of the district’s future holiday plans.

“So many families have so many great memories tied to SantaLand, and we wanted to make sure that even with COVID, we could still help families make new Christmas memories,” Ramoz said. “We feel that considering the circumstances, we did a pretty good job.”

Ramoz said that when considering a replacement for SantaLand in 2020, the Old Mill team had some specific goals in mind. They wanted to give kids a chance to see and engage with Santa, they wanted the experience to be memorable, and they wanted to drive foot traffic to the Old Mill District.

“We’d suspected early on that SantaLand was going to be out for 2020 — no one would be sitting on Santa’s lap this year, and we didn’t want to encourage families to pack into one location — so we started considering other options months in advance,” Ramoz said.

The team’s brainstorming led to the North Pole Express, which Ramoz believed would accomplish each of their three goals. Here’s how it worked:

Last November, two mailboxes were placed in the Old Mill District, where children and families were invited to drop letters to Santa. Twice a week, Santa and his team of elves arrived via a “sleigh” provided by Millsite Landscape Services — it was a holiday decorated Ford F-250 — to pick up the letters as well as wave to the kids, adults, and even business owners spread along the streets.

“I’m a big fan of Santa in general, so we popped outside and waved whenever he came by,” said Matt Perry, owner of Savory Spice, located in the Old Mill District. “Usually Santa’s just in SantaLand and we really don’t see a lot of what’s going on with him, so it was fun to see him drive by and see all the people spread out around the mailboxes.”

Each letter was read, and a team of Old Mill District elves wrote and mailed personal responses back to each child who provided a return address. This, Ramoz said, required a significant commitment by the entire Old Mill team.

“We all chipped in to respond to each and every letter we received, and I’m not going to lie — it was a lot of work,” she said. “But, knowing that each kid would have a personalized keepsake by which to remember their 2020 Christmas made it all worth the effort.”

Johanna Sylvester, a Bend mother of two, said she and her kids appreciated this extra touch.

“I got the kids all psyched up saying there was going to be a special mailbox in the Old Mill this year,” said Sylvester, whose son and daughter are 6 and 3, respectively. “We made a little excursion about it, and they loved it. And obviously, we were super psyched when they got their postcards from Santa.” 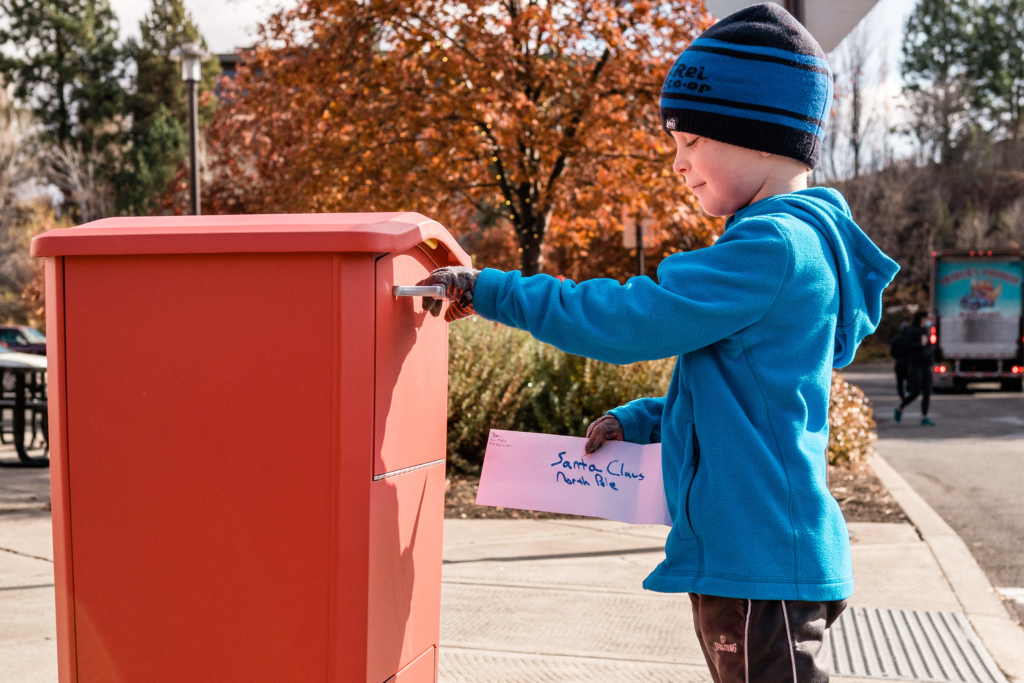 With COVID-19 surging nationwide, local restaurants closed and so many opting for online shopping options, Perry said he obviously had concerns as the 2020 holiday season approached. The fact that the Old Mill District created a new (and safe) holiday experience for the community gave him some peace of mind.

“My hope was they would come up with something creative to keep the Christmas magic alive in the Old Mill while also making sure people wouldn’t be unsafe,” he said. “When they came up with the [North Pole Express], it seemed like a good idea. We were busy, so something worked.”

Allie Kennedy Sole, manager of Lush, agreed. She said that throughout December, families would regularly come into her store donning Santa hats and other festive attire.

“We saw a lot of parents come in with kids when they were dropping off their Christmas letters,” Kennedy Sole said. “It kept the traffic in the Old Mill and it kept people’s spirits high. [The North Pole Express] kept that holiday magic alive for a lot of people.”

While Lush is a relatively new store in the Old Mill District, Kennedy Sole said she was pleased with the level of foot traffic that came into the store throughout the holidays. So was Perry, who said that while revenue was slightly lower than previous years, he still unexpectedly ran out of some popular items.

“As a business owner, I’m continually impressed by the effort management [in the Old Mill District] makes to support us,” Perry said. “That’s not always the case in other shopping centers I’ve worked in. They get that our success is their success.”

While Ramoz said it’s too early to know what the district’s holiday celebration may look like in 2021, the overall success of the North Pole Express will no doubt force them to consider keeping elements of it intact for next year, even if Santaland comes back.

Sylvester said she and her kids would welcome that.

“My kids had a really wonderful Christmas, and the Old Mill contributed to that,” she said. “I think keeping the mailboxes and the letters back to the kids would be a really fun tradition for them.”