Standing beside the Deschutes River in the Old Mill District last year, Katie Spurlock began telling her boyfriend how much she loved him. When he saw tears of emotion well up in her eyes, a ring in her hand and a photographer, he realized what was happening. It was Feb. 29, leap day, which according to Irish folklore, gives women their turn at popping the question. 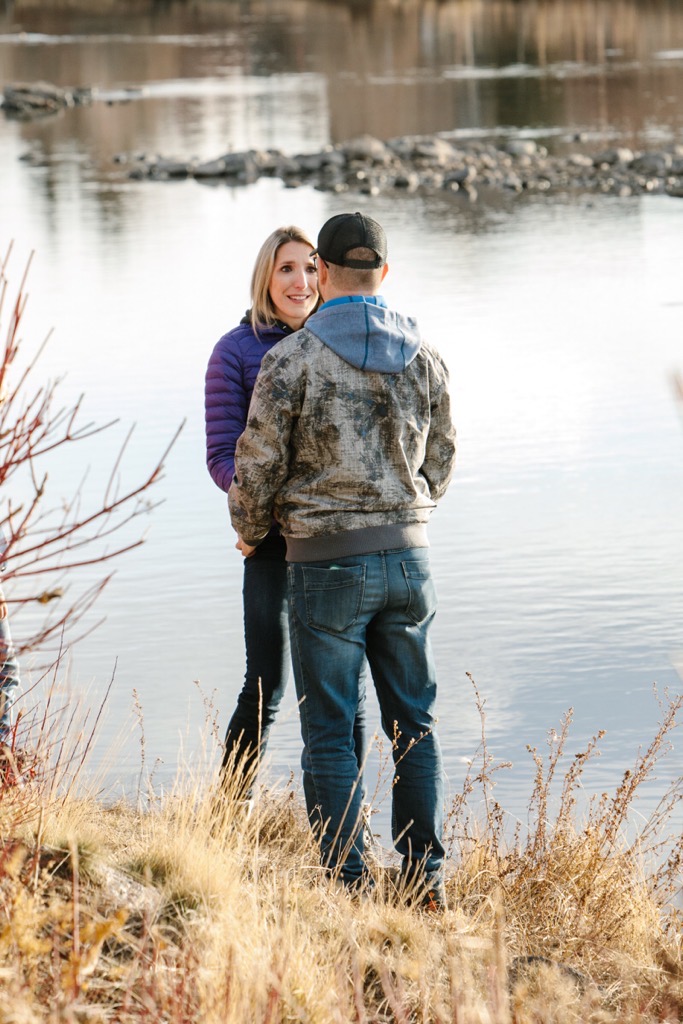 Corey said yes, confirming what they both knew was the answer long before that day. But the proposals weren’t over. Katie’s daughters, Lucy, 5, and Evelyn, 9, integral to it all, were a part of the moment. Katie had brought along two toy rings, and Corey knew just what to do.

“He immediately turned around and dropped down to one knee and gave one to each of the girls,” Katie said. “He didn’t miss a beat. It was really sweet, a whole family engagement.”

Katie and Corey had already been talking about getting married, and she’d seen Saxon’s Fine Jewelers‘s social media challenging ladies to seize the tradition of leap day, the 366th day of the year that occurs every four years. Finally, two days before the legendary day, Katie asked Saxon’s general manager, Natasha Henderson, and their marketing specialist, Kati Magana, friends she’d known from growing up in Bend, if anyone had taken them up on the idea.

Nobody had, so they planned it all the next day, with Saxon’s arranging for a photographer and a temporary ring for Katie to present while she had a custom ring being made. Crafted of tantalum, a precious metal similar to platinum, she had a tree etched on its exterior, and the inner sleeve embedded with a piece of juniper, signifying the love she and Corey have for Central Oregon. 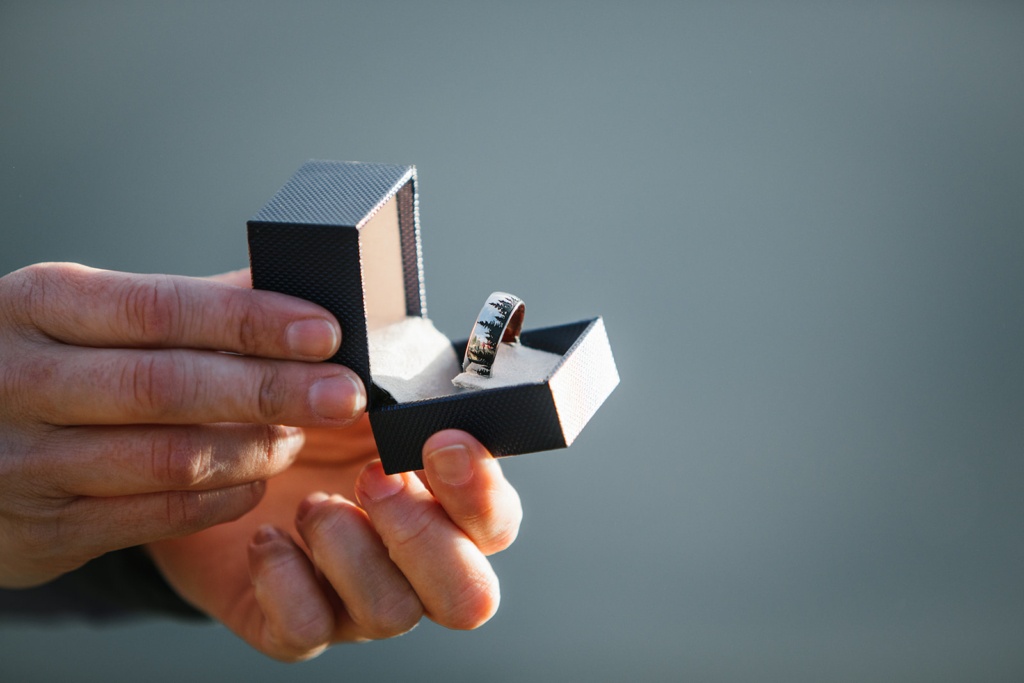 For Corey, who’d been trying to arrange a surprise wedding in Mexico and was struggling to find a time that could work, the role reversal was perfect. “Honestly, it was kind of a relief—something I didn’t have to come up with, and I know she really loved doing it,” he said. His proposal to Evelyn and Lucy made it that much better. “They’re just as much of this as Katie is,” he said. “It’s all one big package. This family is like a dream of mine, and it landed right in my lap.” 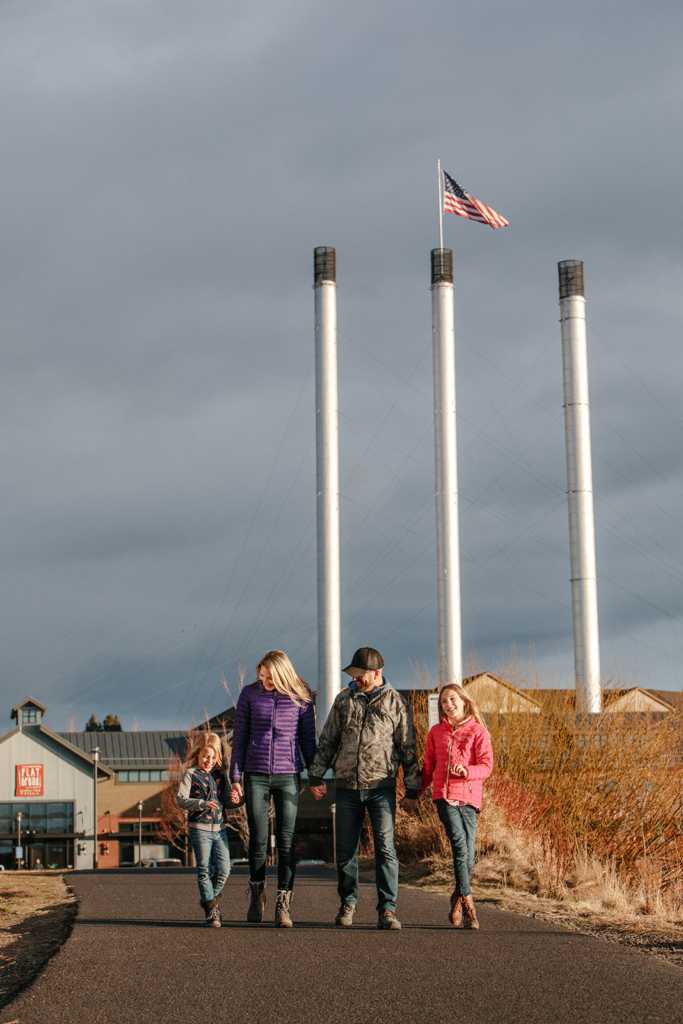 Corey ordered a rose gold engagement ring with symmetrically cut, sparkling Hearts of Fire diamonds. As soon as he and his fiancé picked them up at Saxon’s, he got down on his knee and proposed to Katie outside the front door. When they made their wedding vows in May, on the edge of the Deschutes River Canyon near Terrebonne, the family of four each exchanged vows. Corey slipped a yellow gold wedding ring with more brilliant diamonds onto on Katie’s finger. 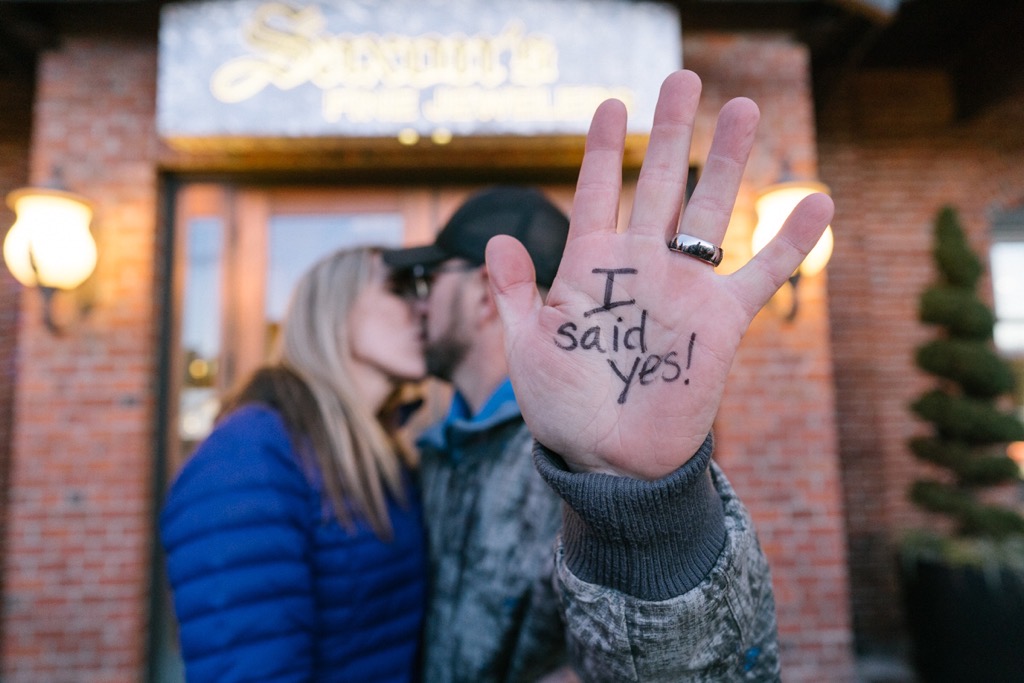 Leap day is just one example of how couples are creating new traditions, said Saxon’s Kati Magana. “There aren’t any rules, people do what works for them,” she said. “From the rings you choose to how you propose, there can be a lot of freedom in making it right for you. Katie’s proposal was great—a little outside the box—and such a great way to honor their family and the life they live.”