A well-known Bend kitchen shop that moved into the Old Mill District a decade ago is under new ownership – and, a new name – the culmination of months of planning, training and mentorship with the store’s founders, said new owner Kara Hansen.

Hansen took over ownership of Ginger’s Kitchenware in January and this summer rebranded the store under a new name, Kara’s Kitchenware. The name change, she said, was something she didn’t take lightly as she formed a strong personal relationship with former owners, Jaime and Ginger Aguirre, prior to ultimately purchasing the business.

The name change, however, ultimately reflects on Hansen’s desire not to drastically change the business, but to build from the long-term culture of community established by the previous owners. It also aligns with her plans to grow and diversify many of the products and services offered at the store.

“My goal is to maintain the spirit Ginger and Jaime built up, but take it to the next level,” Hansen said. “We’re adding and changing a few things up where we can get some buzz back into the store again.”

In the more immediate term, Hansen said regulars to the store will noticed a rearranged floor plan, some new product lines featuring a wider variety of price points, a chef’s corner to promote higher-end equipment for the local chef community, and the sale of wine.

Hansen said she also looks forward to bringing cooking and culinary classes back to the store. She also plans to accommodate bridal and baby showers, bachelorette parties, and perhaps even tea parties for kids.

“We have had so many customers who have begged us to start culinary and cooking classes back up and to make them true learning experiences,” Hansen said. “Things like learning how to make pasta, how to make bread, pastry classes, basic knife skills … whatever people want to learn. We will be bringing all that back.”

She also has two chefs on staff to help with classes as well as provide professional insight to her and Kara’s Kitchenware customers.

A retired nurse looking for her next challenge, Hansen said a friend told her about the Aguirre’s desire to sell their store early in 2020, information that initially intrigued her despite her lack of retail experience. As her interest grew, Hansen said she got to know the Aguirre’s quite well. In fact, they took Hansen under their wings to teach her the business and make sure she made her final decision with eyes wide open.

“I came here and started observing,” she said. “Jaime and Ginger had been here 13 years, and they had done a really good job. I can’t say enough about them as far as how they taught me. I went ahead and signed the official papers and started working with them daily – the front of the house, the back of the house, bookkeeping, orders, customers, paperwork … everything.”

Hansen said she continues to learn more every day, especially from the staff members who stayed through the transition. “It’s been a real positive experience,” she said. “All the staff stayed except for one, so we have some consistency for the customers. But, they’ve also been awesome and taught me a lot, as well. We’re like family here already, and it’s super cool.”

Hansen said she looks forward to supporting the community as Kara’s Kitchenware continues to grow and evolve.

“The community’s really embraced us as a whole,” Hansen said. “Now I want to work on giving back. Whatever that may be, I just can’t say enough about how welcoming everybody’s been.” 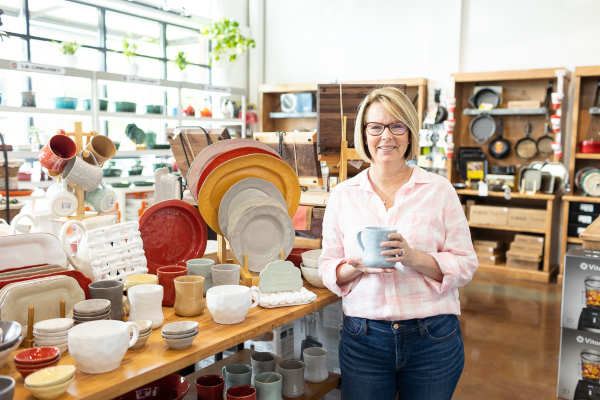