Cultural happenings in Bend and beyond

There’s always something going on in Bend during the spring and summer, from History Pubs and photo workshops to visiting scholars and art talks.

It’s the American dream: get a good education, work hard, and achieve prosperity and success. This is the America we believe in—a nation of opportunity.  But during the last 25 years we have seen a disturbing “opportunity gap” emerge. Americans have always believed in the idea that all kids, regardless of their family background, should have a decent chance to improve their lot in life. Now, this central tenet of the American dream seems no longer true or at the least, much less true than it used to be.  Professor Putnam’s nationwide research on this topic included a case study of the opportunity gap in Bend.
www.cocc.edu/departments/foundation/vsp

Just like ample sunshine and panoramic views of the Cascades, fire is a natural part of our Central Oregon ecosystems. Nicole Strong, assistant professor of forestry and natural resources with Oregon State University Extension Service, will describe the different ways our Central Oregon forest ecosystems have adapted to and depend on fire. Nicole will discuss how forest and wildfire management during the past 100 years has impacted the health and resilience of forests today —and look at some examples of community-based, collaborative forest restoration taking place across our region.
www.highdesertmuseum.org/events/naturalhistorypub-may

Just how different are birds from us? Approaching bird behavior from surprising angles, bird expert Noah Stryker will explore the astonishing homing abilities of pigeons, extraordinary memories of nutcrackers, self-image in magpies, particle physics of starling flocks and other mysteries. Noah reveals why birds do what they do and how we can relate. The behaviors of birds are often closer than they seem, with distinct personalities, emotions and intelligence. By studying them, we can reflect on our own parallel experiences. Noah will bring together cutting-edge science, personal stories and a dash of philosophy to illuminate the lives of birds.
www.highdesertmuseum.org/events/bird-world 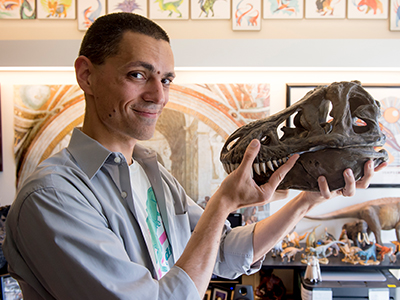 Leonard Finkelman, Assistant Professor of Philosophy at Linfield College and graduate student in paleontology at the University of Oregon

Presented by Leonard Finkelman, Assistant Professor of Philosophy at Linfield College and graduate student in paleontology at the University of Oregon.

If there is one thing on which people of all kinds agree, it’s that dinosaurs are awesome. Unfortunately, Oregon doesn’t have any! Even so, the Beaver State makes up for its lack of T. rex with a fascinating and extensive fossil record. Join us for a tour through our state’s literally explosive prehistory, from its start in the Blue Mountains to the end of the Ice Age in your own backyard.
www.deschuteshistory.org/events

All ages are invited to celebrate Redmond Park and Recreation District’s* special event at the historic Tetherow Homestead. Learn about the history of the homestead and river crossing, and our plans for the coming restoration. There will be games, a Pioneer general store, storytelling, and mountain man skills for kids, as well as site tours, Central Oregon oral histories, and an info about genealogy research.

Now owned by Redmond Area Parks and Recreation Department, the Tetherow Homestead is the site of the oldest residential structure in Deschutes County. A.J. Tetherow filed a claim in 1877 and according to historical records he operated a cable ferry on the Deschutes until the first bridge was built in 1885. Over the years there has been a brewery, a blacksmith shop, and an inn.

The day will include tours of the property, demonstrations of heritage skills, crafts, and games.

The final program on the AAUW schedule features Oregon author Jane Kirkpatrick, internationally recognized for her lively presentations and well-researched stories that encourage and inspire.

A New York Times Bestselling author, her works have appeared in more than 50 national publications including The Oregonian, Private Pilot and Daily Guideposts. With more than 1.5 million books in print, her 30 novels and non-fiction titles draw readers from all ages and genders. Most are historical novels based on the lives of actual historical women who lived extraordinary lives. Her works have won numerous national awards including the WILLA Literary Award, the Carol Award, USABestBooks.com, Will Roger’s Medallion Award and in 1996, her first novel, “A Sweetness to the Soul,” won the prestigious Wrangler Award from the Western Heritage and National Cowboy Museum.

Central Oregon Writers Guild will hold its 11th Annual Contest Winners Showcase. Authors will share their winning entries with families, friends, and the public at this free event. Light refreshments after the readings. Books from contest winners, judges, and Guild members available for purchase.
www.CentralOregonWritersGuild.com.

Anish speaks regularly about her adventures and her first book “Thirst: 2600 Miles to Home”, chronicling her Pacific Crest Trail record, published by the non-profit publisher Mountaineers Books, is available everywhere books are sold. Books will be available at the event, with a signing to follow.

As a professional speaker, her talks are sought after for their adventure stories, humor, and the applications of trail lessons to life off the trail.

Christopher Boucher is thrilled to be serving as Writer-in-Residence at Deschutes Public Library just two days before the publication of his third novel, “Big Giant Floating Head” (out June 18 from Melville House). Chris’ afternoon reading will feature selections from the new novel, which tells the story of a character named Christopher Boucher who is navigating the end of a marriage and the mysteries of the fictional town of Coolidge, Massachusetts. Oscillating back and forth in time, “Big Giant Floating Head” contains strange surprises at every turn: Christopher briefly dates a woman with an invisible dog, contracts a strange illness that divides him in half, participates in a failure competition, and joins a community called The Unloveables. In the face of these trials and others, Christopher struggles to regain his bearings, make sense of a new reality, and chart a course forward.