Historic preservation is near and dear to our hears here at the Old Mill District.

For nearly a century, timber production was the unchallenged king in Bend, most of it taking place along our stretch of the river.

The first of the big mills, operated by the Shevlin-Hixon Co., opened in March 1916. A month later, a rival company, Brooks-Scanlon, began operations at its “Mill A” complex on the other side of the Deschutes River. In 1922, Brooks-Scanlon established an additional, bigger mill complex upstream from Mill A. This “Mill B” site makes up the largest portion of the Old Mill District.

At their peak, the Brooks-Scanlon and Shevlin-Hixon operations were two of the largest pine sawmills in the world, running around the clock and employing more than 2,000 workers each.

In 1950, facing dwindling timber supplies, Shevlin-Hixon sold its interests to Brooks-Scanlon. Brooks-Scanlon’s Mill A site closed in 1983 and was in a state of near ruin before being restored in the early 1990s. The old brick powerhouse buildings and their three towering smokestacks still stand, silently testifying to the district’s colorful past.

Today, 11 historic buildings, including the former powerhouse structures, can be seen throughout the Old Mill District. Here’s their story:

REI: Home to the Old Mill District’s iconic smoke stacks, the REI building actually is made up of two historic buildings, Brooks-Scanlon’s powerhouse and fuel building. Deschutes Historical Museum executive director Kelly Cannon-Miller points out that, “The powerhouse that relied on the forest for timber now supports a store that also relies on the forest for its clients.”

Saxon’s Fine Jewelers: Ninety years ago this building housed wood scraps and timber byproducts to feed into Brooks-Scanlon’s powerhouse. Today it’s home to Saxon’s Fine Jewelers on the ground floor and Level 2 Global Food & Lounge on the second floor. When Saxon’s moved into the space in 2006 the interior of the building was outfitted with tin ceilings, vintage light fixtures and wood flooring. Additionally, wood beams and the original brickwork and steel trusses highlight Saxon’s, as does a 7-foot-diameter sawblade in the building’s entryway.

White House and rail cars: The “White House” was the former management office of the Brooks-Scanlon mill on the east side of the Deschutes River. It’s since been relocated to the back of the Les Schwab Amphitheater to accommodate hospitality for talent. Behind the White House stand four refurbished rail cars once used at the mill. They now serve as dressing rooms and offices.

Art Station: Between 1911 and 1958, the current home of the Art Station was known as the Oregon Trunk Railroad Depot and served as the Bend train station near downtown. Passenger service in Bend ended in 1958, though, and the train depot was then used mainly as office space. When planning for the Bend Parkway began in the 1990s, the station was forced to move. In 1999, the building was taken apart, stone by stone, and relocated to its current location on Shevlin-Hixon Drive across from the Les Schwab Amphitheater railcars. 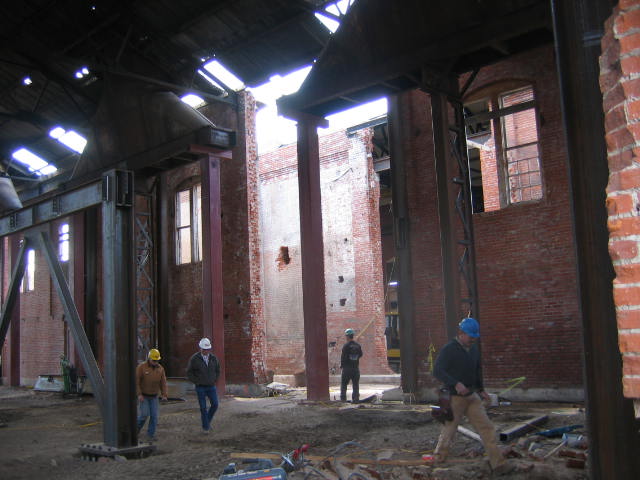