History, science and art exhibits on display in Central Oregon

Our local museum’s in the Bend area do a phenomenal job telling the story of this place we call home. Be sure to check out these exhibits that are running through the summer and fall.

Desert Reflections: Water Shapes the West weaves together science, history, art and contemporary issues to explore the role of water in the region’s past, present and future.

The exhibit connects visitors to water and its management through the lens of three different basins in the region — the Mid-Columbia River Basin, Great Salt Lake Basin and Klamath Basin. It will illuminate how water has shaped the High Desert’s natural, cultural and geological history. It also explores how it features prominently in contemporary issues such as resource consumption, Indigenous sovereignty and climate change.

In addition to the discussion of the complexities of water management, Desert Reflections will connect visitors to its significance through visual art, music and spoken word performances. The High Desert Museum commissioned artwork from four Pacific Northwest artists for the exhibition. The project involved a field trip into the desert with experts in order to spark discussion and inspiration for the pieces.

Presentations from multiple artists will create an immersive experience. You will find visual art alongside the Museum’s stream and large-scale art pieces inside the Museum. Bend Creative Laureate and spoken word artist Jason Graham, known as MOsley WOtta, is creating a video installation inside the Museum and an outdoor display along the stream behind the Museum. Klamath Modoc visual artist Ka’ila Farrell-Smith, who looks at art as a means of activism, will present paintings created using traditional Indigenous art practices. Her artwork is in response to the proposed oil pipeline through the Klamath Basin. Harmonic Laboratory, a mixed-media art collective from Eugene, will weave together video, dance and choreography to explore the rhythms of water. And Dana Reason, composer and sonic arts teacher at Oregon State University, will create a site-specific, large-scale interactive sound and performance work. It will utilize research data on water tables in Oregon.

Moon Country: Oregon and the Space Race
Through November 10
Free with admission to museum

More than 50 years ago, as the space race between the United States and Soviet Union reached a fever pitch, Central Oregon played an important yet little-known role in preparing U.S. astronauts for lunar landscapes.

The National Aeronautics and Space Administration (NASA) was established in 1958 and, in a race for supremacy with the Soviet Union, set its sights on being the first to put astronauts on the moon. NASA theorized that Central Oregon’s volcanic terrain resembled that of the moon, creating an ideal place for geologists to train astronauts and test equipment. The Apollo program trained in Central Oregon in 1964 and in 1966. This year marks the 50th anniversary of the first lunar landing — on July 20, 1969, commander Neil Armstrong and lunar module pilot Buzz Aldrin landed the Apollo Lunar Module Eagle on the moon.

Moon Country: Oregon and the Space Race features stories and rarely seen photographs from this time period in locations well known to Oregonians, from McKenzie Pass to Paulina Lake. As a backdrop, the exhibit also discusses the turmoil dividing the country during that decade, including the civil rights movement and the country’s involvement in the Vietnam War. Somewhat isolated during those years, Central Oregon was experiencing its own evolution: The timber industry was shrinking, and some were envisioning future tourism with the establishment of Mt. Bachelor as a ski resort.

From the exhibition, visitors will learn that there is a small piece of lava rock on the moon that came from Devils Lake, beside the Cascade Lakes Highway roughly 30 miles west of Bend. In 1971, astronaut James Irwin placed the rock on the moon during his Apollo 15 mission to commemorate his geological training in Central Oregon years before.

Like many astronauts during those years, Irwin completed some of his training at sites throughout Central Oregon such as Newberry Crater, Lava Butte, Fort Rock and Hole-in-the-Ground. The training offered astronauts a chance to learn about terrain they might encounter on the moon and improve their skills navigating challenging landscapes. It also earned Central Oregon the nickname “moon country.” 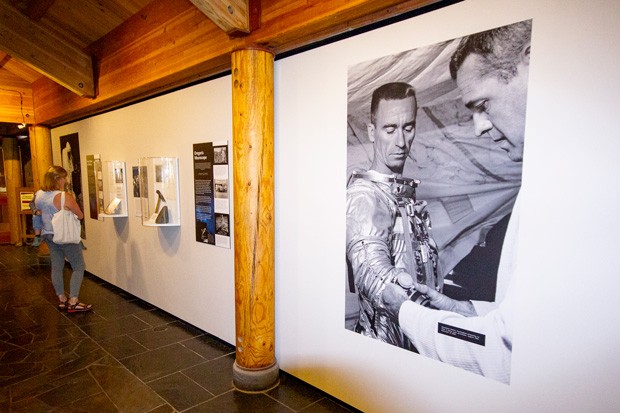 DESCHUTES HISTORICAL MUSEUM
Cruisin’ 97: Tourism and Travel in Central Oregon, 1930-60
Through the fall
Free with admission to museum

While tourism is often talked about, it is usually with regards to contemporary struggles and not in a historical context. Tourism and travel has always been with us, from the Bend Water Pageant to today’s events.

The exhibit centers around the publication of the first comprehensive travel guide to the state, published in 1940, and offering tour suggestions as you work your way down what was then known as The Dalles California Highway. Visitors can rediscover a time when neon signs, drive-ins, and roadside attractions greeted visitors as they wound their way from Smith Rock State Park through downtown Redmond and Bend and past Lava Butte.

This exhibit is funded by a grant from the Bend Cultural Tourism Fund and the Oregon Museum Grant awarded by the State Historic Preservation Office and Oregon Heritage.

Central Oregon and The Great War: WWI and the High Desert
Through September 30
A stirring exhibit complete with uniforms, weapons, news clippings and interpretive panels, the Deschutes Historical Museum’s exhibit helps visitors understand Central Oregon’s role in “The Great War,” as well as that of the United States as a whole.

Long before the invention of the wheel, humans used skis for means of winter transportation. The Deschutes Historical Museum’s exhibition tells the story about skiing from early Ice Age skiers to Bend’s Scandinavian ski heritage.

One of the most comprehensive Nordic Ski exhibits in the Pacific Northwest, you’ll meet the “Musketeers of the Mountains;” Nels Skjersaa, Chris Kostol, Nils Wulfsberg and Emil Nordeen and learn how they turned Bend into the skiing mecca of Central Oregon. You’ll also get to know Olaf Skjersaa, whose prowess in ski jumping mixed with entrepreneurship founded one of the most successful ski shops in Bend. He became the champion of a new generation of skiers that would descend Mt. Bachelor and make Skyliners a name to be reckoned with.

Other prolific ski personalities included in the exhibit include Hjalmar Hvam, the Norwegian ski jumper who won hundreds of ski contests all over the Pacific Northwest and eventually coached the U.S. Nordic ski team; Jack and Virginia Meissner, who resurrected cross-country skiing in a world crazed by Alpine skiing; and past and present standout Bend skiers, such as U.S. Olympian Kiki Cutter, and U.S. Ski Team members Mike Lafferty and Mark Ford.

Located about 65 miles south of Bend, the Fort Rock Valley Historical Society’s Homestead Village Museum near Fort Rock State Park is a fantastic day trip. In 1988 the village opened, which preserves and protects homestead-era structures by moving them from their original locations to the museum site just west of the town of Fort Rock. Currently there are 10 historic buildings on the site, including the Sunset School, the St. Roses Catholic Church, the Fort Rock General Store, and multiple pioneer homes.