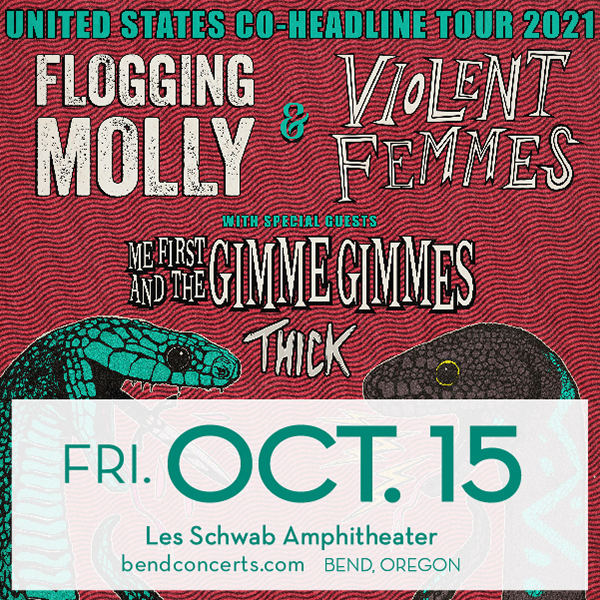 Flogging Molly is an Irish-American seven-piece band blending traditional Irish music and fast paced punk rock. Hailing from Los Angeles, California in 1997, the band is led by Irish vocalist Dave King, formerly of the hard rock band Fastway. They are signed to their own record label, Borstal Beat Records. Flogging Molly released their debut album, Swagger in 2000 which was followed up by their sophomoric album, Drunken Lullabies. Their live shows are explosive, passionate and filled with rowdy folk-rock punk revival sound.

Folk-rock American cult band of the 1980’s the Violent Femmes have released ten studio albums and 15 singles through the course of their career. The trio’s music is raw, their tunes are filled with darkly humorous lyrics and captured the essence of teen angst of the 80’s. The band found immediate success with the release of their self-titled debut album in early 1983. Featuring many of their well-known songs, including “Blister in the Sun”, “Kiss Off”, “Add It Up” and “Gone Daddy Gone”, Violent Femmes became the band’s biggest-selling album and was eventually certified platinum by the RIAA. Violent Femmes went on to become one of the most successful alternative rock bands of the 1980s, selling more than 9 million albums by 2005. Violent Femme 10th studio album, Hotel Last Resort resides among the band’s finest work.