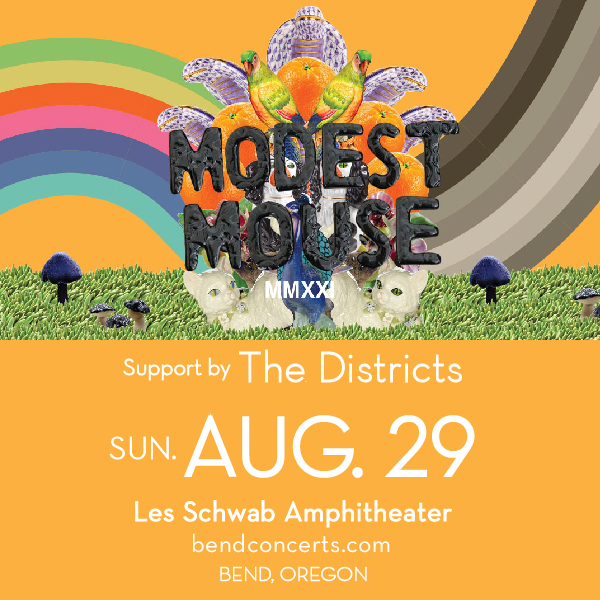 with special guests: The Districts

Hailing from our neighbor to the north (Issaquah, Washington, now based out of Portland, Oregon) the indie rock band, Modest Mouse has been writing and creating music since their formation in 1992. Throughout the years the band has seen multiple lineups but is anchored by frontman, lead singer/guitarist, and banjo player, Isaac Brock, and drummer Jeremiah Green. Brock’s vocals are unique yet abrasive at times, some have compared his vocal style to Tom Waits and are what defines the group’s exciting and quirky sound.

Modest Mouse’s songs often encompass the feelings of despondency, self-awareness with a cynical edge.  When paired with the unstable, lively rock elements, sometimes add banjo, it illustrates the effects of living in the PNW (often filled with grey skies and rain). “Dramamine” released in 1996, from their album This Is a Long Drive for Someone with Nothing to Think About, is a prime example of Modest Mouse’s sound, something that has brought much recognition to the band in the genre of indie rock.

Over the years their sound has softened while holding tight to their indie rock exuberance, with their latest single released in May 2021, “We Are Between”. Their album The Golden Casket (follow up to their 2015 album Strangers to Ourselves) is slated to be released in June 2021.

Starting Aug. 29, attendees of all shows in the 2021 concert season, including this one, will need to bring proof of full vaccination or proof of a negative COVID-19 test result collected within 72 hours of the show for each show they are attending.   More information here.