Our Deschutes River in Bend, Oregon

The Shevlin-Hixon and Brooks-Scanlon lumber mills came in to existence in 1916. These lumber mills, made possible by the railroad’s (Oregon Trunk/Des Chutes Railway) arrival in 1911, sparked a boom that fueled the town’s growth for the next half century. Bend was a bustling town of 5,414 by 1920. For the next several decades, both Brooks Scanlon and Shevlin-Hixon mills operated as the world’s largest pine sawmills. For close to 80 years the mills were the primary source of jobs, revenue and growth in Bend.

Pine production neared record levels and central Oregon’s economy prospered as people flocked to the area.  The Brooks-Scanlon Mill took over Shevlin-Hixon Mill in 1950 due to dwindling log supplies. In 1960, Bend was a thriving town of 12,000 and the Brooks-Scanlon Mill would continue to turn out a large volume of pine lumber for more than two decades. In 1993, Bill Smith formed the River Bend Limited Partnership and acquired 270 acres encompassing both sides of the river.

The area was leased back until 1994 when the Brooks-Scanlon Mill closed production.

Land and river restoration occurred in stages from 1994 – 2001. The Old Mill District restoration master plan included a voluntary cleanup of contaminated portions of the abandoned lands and creating a new zone for the City of Bend (Mixed Use Riverfront) to provide a wide range of uses, including protection and enhancement of natural features and wildlife, residential, office and commercial uses. The Old Mill District was honored with the EPA’s Phoenix Environmental Award in 2002 for brownfield redevelopment. (A brownfield site is land previously used for industrial purposes where the land may be contaminated and has the potential to be reused once it is cleaned up).

Access to this large section of the Deschutes River (14,000 linear feet) was closed to the public since 1920. Now it is a vital wildlife habitat and during the summer is used by kayakers, floaters, anglers, outrigger canoeists and athletes. The River Trail is accessible year round for running, cycling and dog walking. The Les Schwab Amphitheater (former site of the Shevlin-Hixon Mill) hosts several concerts each summer.

The Deschutes River is teeming with animals and wildlife surrounding the Old Mill District in Bend. In fact, we go to great lengths to protect the wildlife in and around the Old Mill because we love animals and birds as much as you do. If you are looking for a nature escape without having to leave town, this is it! On any given day, you may see a beaver or the occasional otter along with a variety of magnificent birds. You can seek out the endangered Oregon Spotted Frog that lives and thrives in our protected marsh areas. And, say hello to the marmots who runabout amongst the wildflowers and rocks.

The next time you’re down here, check out a free pair binoculars and pick up a birding guide from the Ticket Mill to see how many birds and animals you can spot in an afternoon.

Ever wonder what kind of animals you could see along the Deschutes River in Bend? Chelsea’s taking you along with her on a wildlife safari through the Old Mill District and introducing you to a few of the critters that call the banks of the Deschutes River home. If you happen to spot a marmot, beaver, otter or the endangered Oregon Spotted Frog, snap a photo and share it with us by tagging @OldMillDistrict #OldMillDistrict on Instagram, Twitter and Facebook.

The Deschutes River is one of the longest north flowing rivers in the country. The sub surface ground water actually runs south east.

Leave no trace and take your trash with you, wear river shoes, follow recommended river take out locations and plan ahead for the Colorado Bridge spillway.

State of Oregon permits (now required for boats and float toys over 10 ft. in length) can be purchased at REI. Visit Aquatic Invasive Special Prevention Program for more information before your float the Deschutes River.

Bend Paddle Trail Alliance  published the Deschutes Paddle Trail River Guide map of the Cascade Lakes with the help of a grant from the Oregon Parks and Recreation Department. The guide provides a detailed look at 26 miles of the Little Deschutes and 95 miles of the big Deschutes. River map available at Visit Bend and Tumalo Creek Kayak & Canoe.

Tumalo Creek Kayak & Canoe offer a range of tours and classes to enjoy the rivers and lakes on a kayak, standup paddleboard or canoe.

Sun Country Tours offers many ways to enjoy the pristine, sparkling rivers of Central Oregon––from a thrilling, splashing, leave-you-breathless whitewater rafting trip, to a leisurely float (flatwater, standup and float tubes) in the sun on a hot summer day.

Wanderlust Tours specializes in outdoor tours and activities. Our small group tours take you off the beaten path, away from crowds to seek out the quiet of the Central Oregon Cascade lakes, rivers, forests and caves. 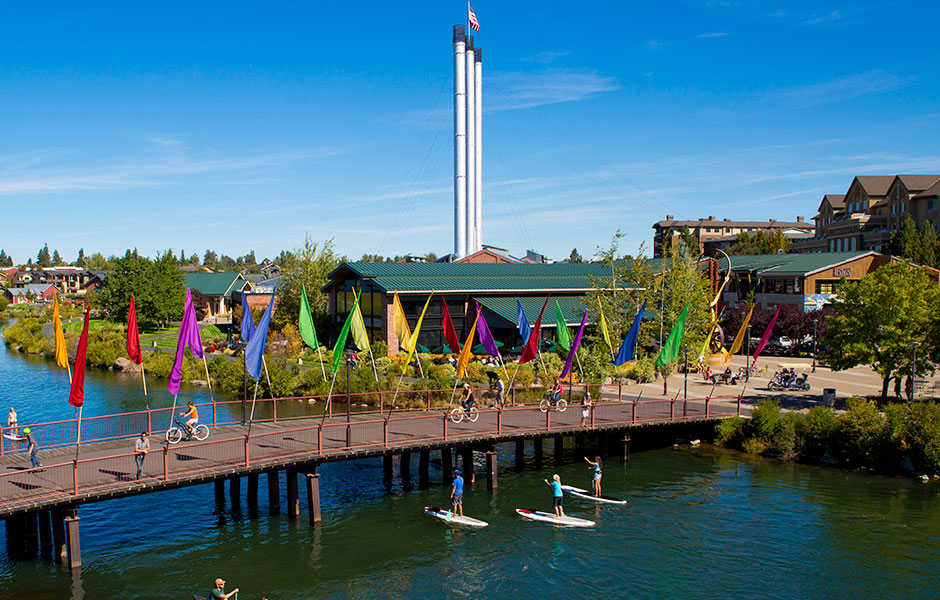 Be a Steward and Love Your River

Deschutes Land Trust conserves and protects land in Central Oregon for Central Oregonians. We care for more than 8,200 acres in our region for today, tomorrow and for generations to come.

Deschutes River Conservancy is a non-profit organization with a mission to restore streamflow and improve water quality in the Deschutes River Basin.

The Trust for Public Land conserves land for people to enjoy as parks, gardens, and other natural places, ensuring livable communities for generations to come.

Upper Deschutes River Coalition‘s goal is to keep the rivers (Big and Little Deschutes, Fall and Spring Rivers) clean and healthy to sustain this resource for wildlife and recreation.

Upper Deschutes Watershed Council is dedicated to protecting and restoring the 2,100 miles of rivers and streams that flow through Central Oregon.